Understand the organisational make up of a CP Team.
Learn the functions of team members.

A protective effort is always a team effort, even when working in a ‘one on one’ situation (one Bodyguard and one Principal). The team is a team of two; the Bodyguard and the Principal. One on one situations are commonplace for many reasons, the most common being that this is all the security that is deemed necessary (by the Principal). The one Bodyguard will wear many hats as well as being the Bodyguard. For instance, the chauffeur, the advance party, the personal assistant, a medic, a mechanic, a washer of cars and security consultant.

Some people will say that you cannot be a good Bodyguard if you have to worry about other things not directly related to security. For example, washing the car or doing the garden. However, generally speaking, if you want the ‘one on one’ job then these things will more than likely have to be done. It is not an ideal situation but you can balance them with a little application and common sense, and don’t forget that in ‘one on one’ situations it is more than likely (but not always) that the threat is quite low. Also, it may be that the Principal’s finances do not stretch to having more employees. The decision to take the job is yours, just as is it your right to leave if you are not happy.

When there is a high threat, it is common to have teams of over 30 members spread over a couple of different residences and looking after all members of a large family. All teams, regardless of their size or purpose for being there, must function well. All members of the team need to be disciplined and have the ability to work well with different groups of people in widely varied settings. As a team member you must have the attitude and willingness to get along with people. You must come to work with the right attitude. There might be someone you dislike on a team, but you should be the only person that knows it!

Although different companies and organisations will have different operating procedures the general breakdown of a large team is as follows. The following descriptions are brief and a more detailed discussion of the different elements and their function will be discussed later.

This person may or may not be the Bodyguard to the main Principal as well as being in overall charge of the protective operation. The Team Leader’s job is to ensure that everyone has all of the information that they need to enable them to carry out their function; he is usually the one that liaises with the Principal and the contracting security company if there is one. On most assignments, the Team Leader has the authority to hire and fire team personnel.

Usually abbreviated to BG, he is a member of the PES (discussed below). However, his role is quite different; while everyone on a team is in theory a Bodyguard, i.e. their function, whether they are drivers or they guard the garden gate, is that of guarding the Principal. There is only one BG per Principal. There may be a day BG and a night BG but generally there is only one BG on one Principal at any one time. The other ‘Bodyguards’ are referred to as the PES. The BG is the person that will be in close contact with the Principal at all times. His job is to shield the Principal from any danger, and ACE which is a acronym for Assess, Cover and control and Evacuate. The BG forms the inner cordon of defence and is responsible for seeing that no threat gets past him and to the Principal. When working as part of the PES, the BG is the one that never stands and fights. He runs away (with the Principal of course), giving body cover as he does so. This role can be (dependent upon the situation) in complete contrast to that of the PES. 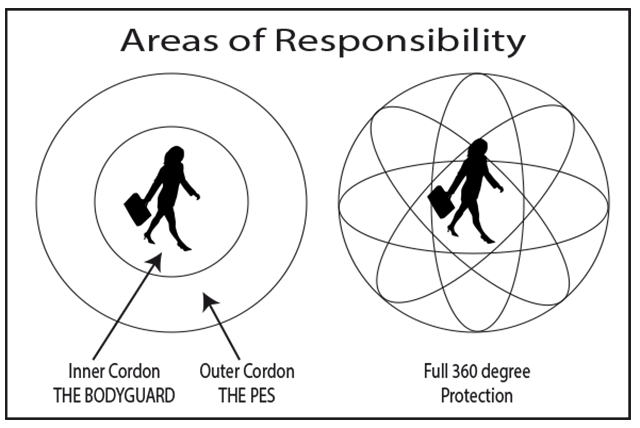 Areas of responsibility. The Bodyguard looks after the immediate area around the Principal whilst the Personal Escort Section guard the outer cordon.

The Bodyguard is the ‘main man’ or woman; he is the one with the ultimate responsibility for the welfare of his charge. He and the Principal are at the centre of concentric circles of protection (concentric circles have the same centre). He is the last piece of protection and he puts himself between every conceivable threat and the Principal. The other circles are made up of the PES and the RST, which we will learn about below.

The PES can have different functions depending on the situation in which they find themselves. Generally speaking, they provide an outer cordon of defence as opposed to the BG’s inner cordon. In some situations their function may be the same as the BGs, that is, give body cover and get away from the danger. In other situations, their function may be to attack the threat and give the BG time to get the Principal away from the danger.

Again, depending upon the situation, the PES may be as close to the Principal as the BG; in others, they may be much further away. For instance, outside a venue in a car ready to be called upon if needed.

The makeup of the SAP will vary from one assignment to another; some may have one or two members that are dedicated to advance work and do nothing else. Others may only use an SAP when they have a particular need. Basically, the function of the SAP is to ensure that there are no surprises for the Principal while he is out and about on his social and business schedule. The SAP will travel in advance of the Principal, checking that routes and venues are OK. They may do this months in advance and it may include, for example, the planning of an overseas trip, or they might be just minutes in advance (it may be that the Principal wants an impromptu trip to a local restaurant with which the team are not familiar). The SAP carries out an important function; it needs to have excellent communication skills, exercise good personal security and be trained in all aspects of search.

The RST, as the name suggests, look after the physical security of anywhere that the Principal is resident. This could be a house, a hotel, or a yacht. Many Principals secure all of their residences with an RST, even if they are only resident for a few weeks of the year. This is where most fledgling Bodyguards will serve their Bodyguard apprenticeship. The RST will need to have the skills to use the modern equipment that is now used to assist in the security of premises. They need to work hard and hope that they are ‘noticed’ and eventually move on to better things. Members of the RST will often be required to carry out route reconnaissance or to do some SAP work. Mess these tasks up and you are destined to ‘stay in the garden’. Do a good job and the next time someone in the PES has a day off you might get to stand in and impress. 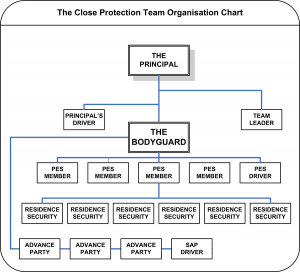 While all members of the team should be able to drive, often the role of driver is a dedicated one. That is, someone is employed solely as a driver. This driver may or may not be trained in Close Protection. When they are not, it is a crime, because sometimes the most effective weapon that a Close Protection team has is the vehicle that they are in. In an emergency situation, it is much better to have a Close Protection trained driver that can work with the team rather than some fat chauffeur who is only employed because the Principal likes the way he wears his peaked cap and keeps the car clean!

Driving is a specialist role and if someone on the team is a dedicated driver then those drivers need also to be dedicated to building the defensive and evasive driving skills that a team may one day need. Of course, a smooth drive and a clean car are also important.

Category: An Introduction to Close Protection