People who are rich can worry that others might steal their riches from them, kidnap their loved ones for ransom, or attack them out of jealousy. They may well think that they need a Bodyguard to allay their fears.  But you do need to be very rich to employ a Bodyguard. If a client wants just one person on duty at any time, ‘twenty-four-seven’,  that equates to two or three men working shifts. This is going to cost over of $300,000 a year, which is a considerable sum even if they are filthy rich.  If, as many do, they use a whole team of security personnel then a sum akin to a major lottery win is required every year.  So the Bodyguard might well be a necessity but he could also be described as a ‘luxury item’ that only a few can afford. There is a bit of irony here: the rich and famous feel that they need Bodyguards because they are rich and famous, but it is only they that can afford them anyway!

The main function of a Close Protection Officer is in essence quite simple. Officers are employed to defend their clients from all forms of attack, on them, their loved ones and their property. They are also employed to deal with accidents and emergencies. Close Protection Officers ensure that the Principal can get on with his life without worrying too much about their security. If only it were that simple!

It must be said that there are vast numbers of extremely rich and sometimes famous people who never feel the need to employ Bodyguards. They get by with the judicious use of locks, alarms and copious amounts of common sense. Most of these people live long and happy lives, never regretting the decision not to employ a Bodyguard.  In contrast, there are others who have used Bodyguards most of their lives. They may have had a Bodyguard with them on their very first trip to nursery school and cannot imagine going through life without a person nearby to protect them.  They can be utterly dependent on a Bodyguard for every security-related aspect of there lives.

The different users of Bodyguards

Some people employ Bodyguards for no other reason than it’s fashionable to do so, and the more Bodyguards they have somehow makes them appear more important. In some circles, a large Bodyguard team can be as impressive a success symbol as the £200,000 car that only gets used to go to the odd party, or the yacht that only gets used for three weeks a year. This type of principal can be a pain, because you really are a ‘designer accessory’ rather than the security professional you aspire to be. But the money is good  and, as  long as you don’t mind carrying the odd bag or walking the dog, the job is as secure as they come. What’s more, because the risks are slight, there are no shortage of takers for this type of position.

Some users of Close Protection have a very real (or sometimes imagined) reason for protection. They see the use of a Bodyguard as an absolute necessity (sometimes a necessary evil). Moreover, they take you and their security very seriously. This type of principal is employing protection for all the right reasons. Apart from the obvious risk to you when working with a client with ‘real’ threats present, this is the very best type of principal to work for.
The aforementioned are of course not the only users (or abusers) of protection. There are those that have protection thrust upon them; sometimes it is not the end user that is paying for it and in some cases would rather not have it at all. Generally, this type of principal is, for example, sons, daughter and wives. Another group is company executives or representatives, where the company perceives a threat and pays for the protection. Depending upon the threat, this type of protective effort may be very welcome or frowned upon by the protected. 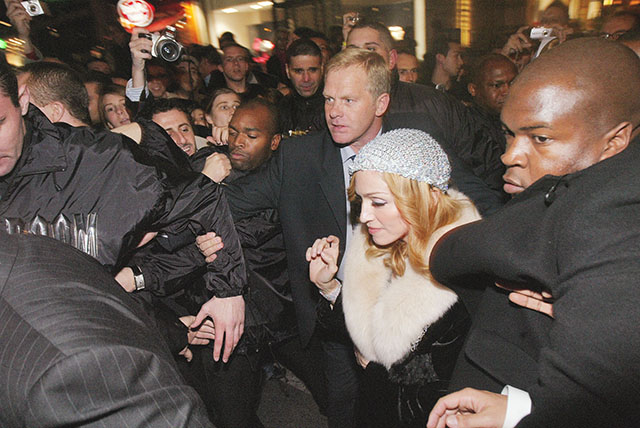 A team working hard to keep their principal safe.

As a private Close Protection Officer you will not be involved with public figures that require protection such as members of government. This protection is more often than not provided by the State. There may be some overlap from time to time and private contractors might find themselves helping on the fringes of what is clearly a government area of responsibility. Rarely, however, is there enough work of this kind around which to build a business. There is one other type of person who comes to you in need of protection; the one that needs your protection but cannot afford your fee. You’ll have to make a decision on that one but it shouldn’t be too difficult!

One thing that can be said is that once a principal has used the services of a good protection team then they are very reluctant to dismiss it and go unprotected. It’s like a belief in ‘Sod’s Law’. (Anything that can go wrong will do so.) The day that the protection is not there, will be the very day that they really need it. It’s unfortunate for the Bodyguard when a principal starts to think (even for a moment) that he can do without the protection. He might be reluctant to dismiss the team in case he needs them for some unseen or unanticipated danger,  but this is where the rot can set in. The client may start to ignore some or all of the advice you give him; he may start to resent the inconvenience of having a Bodyguard with him 24 hours a day; he may start leaving you or your team behind when doing things which he considers are ‘safe’; he may start cutting down on team numbers or not renewing security equipment.

Then there follows the danger that the Principal decides to ‘get his money’s worth’ from the team and starts putting them to work in other areas such as in the garden. This is very short-sighted on the part of the Principal and it makes no sense to employ a well-trained professional Bodyguard to do anything other than Bodyguard. At this point, the Bodyguard has to make some decisions. It’s not an issue of dignity (I don’t weed gardens.), rather it is one of function. A Bodyguard is employed on the calculated assumption that his services as a Bodyguard will be at some time needed. ‘Sod’s Law’ will again dictate that when you are needed you will be walking the dog or collecting some groceries, instead of being alongside the person you have been paid all this time to protect. Do you want this job or not?

Once you are working your employer must be made acutely aware of your function; to him it may appear that you are doing nothing all day long. You must educate your Principal as to what your function is. To do your job properly you must have the trust and complete co-operation of your principal or you may as well not be there. Communicating with your principal is of extreme importance. He or she is paying for the kind of protection that will enable them to go about their business and social schedules with the confidence that you are doing your job and with as little inconvenience to them as possible.

Category: An Introduction to Close Protection