Learn about the skills
The different types of armour.
Understand armour’s capabilities
and limitations

The Bodyguard should make good use of armour whenever he can. The concealed vest he and his Principal might wear, the bullet-proof glass in the Principal’s residence and the fully armoured vehicle that they might drive are all common uses of armour. A Close Protection Officer should have a good working knowledge of all types of armour, its capabilities and limitations and the pros and cons of its everyday use.

The history of body armour

Soldiers and civilians have been wearing body armour for thousands of years. As long ago as 3000bc ancient Egyptians were known to have draped themselves in thick animal hides to protect them in battle. Roman warriors covered their torsos with custom-made metal plates before going to war. By the 1400s, armour in the western world had become highly sophisticated allowing a warrior to fight effectively while being well protected. With the right armour an army became almost invincible.

When Berthold Schwarz, a German monk of the early 14th century, worked out how to use gunpowder to propel a projectile, the traditional armour makers’ response was to make thicker and stronger armour. The projectiles initially only had enough energy to penetrate the thin layers of metal, but as weapons became more effective at piercing the armour and killing the wearer, the armour makers kept making the armour thicker, which of course meant heavier. The result was that to be effective at stopping a bullet the armour was too thick, heavy and cumbersome to wear.

Today we have modern materials that can stop almost all bullets, even at point blank range. The person wearing the body armour will still feel the energy of a bullet’s impact, but will feel it over the whole torso rather than in a specific area. If everything works correctly, the victim won’t be seriously hurt.

Today’s hard armour is made out of thick ceramic or metal plates; it functions basically the same way as the iron suits worn by those medieval knights. It is so hard that a bullet or other weapon is deflected and just cannot penetrate. That means that the armour material meets the bullet with almost the same force with which the bullet pushes in, so the armour is not penetrated.
Police and military personnel in high-risk situations wear hard body armour. The bullet- proof plates are inserted into custom-made pockets in jackets and while modern ceramic plates are not as heavy as the armour worn by a knight of the round table, it is only just marginally more comfortable than that worn by our medieval cousins.
Typically hard body armour offers more protection than soft body armour, but, in a Close Protection role, it is much more cumbersome. This means that Close Protection Officers need compromise armour that is lighter and softer.

It wasn’t until the 1960s that engineers developed reliable bullet-resistant armour that a person could wear all day comfortably. Unlike traditional heavy, hard, metal armour, the armour developed was soft! It wasn’t made out of pieces of metal but was formed from advanced woven fibres that were sewn into vests and other soft clothing. This is now known as soft body armour.
To most people the thought of ‘soft body armour’ doesn’t quite make sense. How can a soft piece of clothing stop bullets? The principle at work is actually quite simple. A piece of bullet-proof material is just a very strong ‘net’ of fibres. This net of fibres ‘catches’ a bullet in a multilayer web of the woven fabrics. The engaged fibres absorb and disperse the energy of the impact to other fibres in the fabric weave. This transfer occurs at net ‘cross-over points’, where the fibres are interwoven. Additional energy is absorbed by the other layers in the body armour, reducing the amount of transferred energy that causes ‘blunt trauma’. As unbelievable as it sounds, these woven fabrics are strong enough to perform, while offering the additional advantage of being more comfortable to wear, than traditional plastic or metal based shield products.

Choosing body armour for your client

The choice of armour that you and your client wear will of course be influenced by the threats and risks that you both face. If you base your day-to-day need on comfort then you will always choose to wear soft armour or be armour free. If you want the best available protection then you might opt for the heavier hard armour. There are other things though to take into consideration. Bulky hard armour can impede your movement. In addition to this, being on your feet all day wearing hard body armour means you will lose a lot of body fluid, especially in a warm or humid environment. Soft, very concealable armour may not offer you or your client the protection you need. 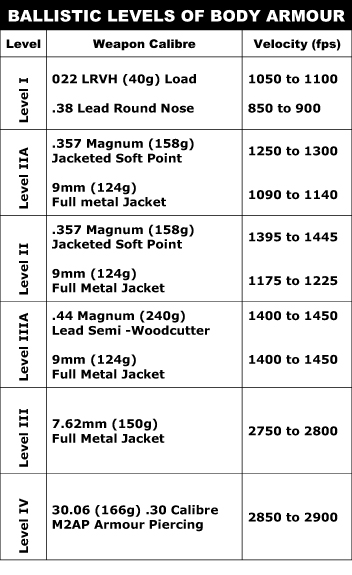 Heavy body armour is difficult to disguise and anyone in close proximity will probably notice it. If it is obvious that ballistic plates are being worn, then an attacker may well be encouraged to go for a head shot to avoid the armour. A concealed vest of soft body armour might well make an attacker go for an easier body shot and the Principal could be saved by the vest. In this case, the heavy armour increases the risk rather than reduces it. The discomfort of wearing heavy armour makes it more likely that your Principal (and you) will avoid wearing it whenever possible, If the situation dictates that you must wear hard armour this can be made much more comfortable with well-made vests and it pays to shop around to find the very best kit.

It is a good idea to insert Level IIIA protection into a briefcase, or back pack. This will then transform an inconspicuous everyday object into a convenient ballistic shield for pistol and 9mm sub-machine-gun threats, these plates can also cover gaps in your body Armour when riding in un-armoured vehicles. The cover that a briefcase could give your Principal in a shooting situation could easily save his life.

The future of body armour

Recently there have been major advances in ballistic material, this is good news for the Close Protection Officer because new vests will have less bulk and be easily concealed whilst at the same time be more efficient.  An interesting development is the use of nano technology. Nano technology is an umbrella term that covers many areas of research dealing with objects that are measured in nanometres. A nanometre (nm) is a billionth of a meter, or a millionth of a millimetre. American and Israeli companies say they are very near to building a super armour using this new science.

For the vest to work you have got wear it, and if you are going to wear it every day then it will need to be comfortable.  If profile is an issue then a vest worn under street clothes can be used. For protection against rifles and high velocity weapons then the soft armour will have to be supplemented by armour plate. These hard slabs of armour come in many sizes but 10 in by 12 inch plates will fit in most vest pockets. Do not forget the assistance that a ballistic shield can give, in a car or disguised in a briefcase they can be invaluable.
There are a vast number of manufacturers and distributors of body armour. Google “body armor” and you will get over 46,000 links. So if you are shopping for it, get recommendations and look for references.